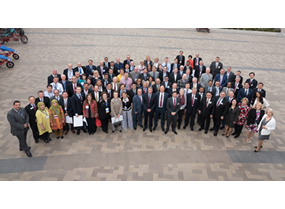 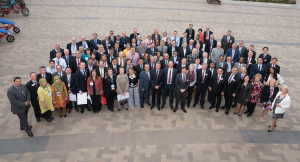 Every year the World Federation of Orthodontists enjoys a reception by the AAO at their annual conference. The 2017 reception was on Sunday April 23rd in San Diego, and Ireland was represented by Stephen Murray, currently the president of the Orthodontic Society of Ireland.

The event began with breakfast, and by coincidence the waiter looking after our table had been responsible for procuring dental supplies in his previous career in the army. Our conversation started when he remarked he had a similar jacket to mine when he was in armed services and he was curious as to how I’d procured mine, doubly so as his had been stolen shortly before he became a civilian.

The current president of the WFO is Allan Thom, who welcomed us to the meeting and invited us to introduce ourselves. There were about 70 orthodontists from over 50 organisations. The AAO president, Dr DeWayne Comish welcomed us on behalf of the AAO and introduced the organisers of the event and then particularly welcomed the new and affiliate organisations that are joining the WFO.

The WFO is running a competition among its members to design a logo for the silver jubilee of WFO. Entries will still be accepted up to September this year, so at time going to print, there is still time for Irish members to enter.

The WFO has designated May 15th as World Orthodontic Health Day and will make posters and artwork available on its website for this.

Takashi Ono discussed the next International Orthodontic Congress, which will be in Yokohama in 2020, and the location of the 2025 Congress was announced – beating a shortlist that also included Cancun, Capetown (who Ireland had supported) and Madrid, Rio was declared the winning bid. For what it’s worth, putting the bid together for this event would take at least a year of very serious and intense work to demonstrate a host city’s suitability.

Next year’s event will be in Washington DC.